A lot of people think you are crazy when you say that you would rather buy a blaster than a hobby box.

Yeah it is, but here is the deal. I get a crazy grin on my face every time I throw down for some Ginter Blaster and receive something like this... 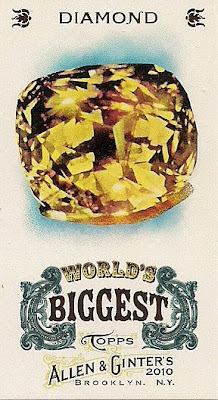 Ain't that a purdy diamond? Have you even SEEN this card, much less is a hobby box? I gotta hand it to Topps, they find a way to keep you buying long after you already have about 10 of every base card. I have said it a million times, the base is horrifically boring this year, so why do I keep buying the stuff? The minis of course. And I am under a strong belief that some minis are either blaster and retail exclusive, or just way higher-seeded in retail than hobby.

Now I had no idea that World's Biggest even existed until I started seeing some blaster break posts. I have since purchased three blasters of Ginter and have pulled...

A Prince Fielder Celestial Hobby box case hit, the Tooth Fairy, and various dinos and Lords of Olympus have been added to my collection from blaster and retail packs, and then along with the diamond card... 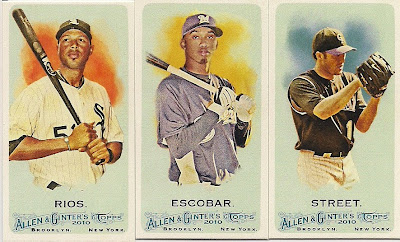 Sure, I am passing up my chance at a Shin Shoo Choo pair of pants by not getting a hobby box, BUT you would be surprised at the frequency of hits in blasters. I got two hits out of three blasters.

Same story goes for T206. Finding lots of minis and short print base cards, as well as two hits, a caramel auto of some Oakland rookie, and a decent Curt Schilling Diamondback jersey relic.

Anybody else out there have decent luck with retail and blasters? I was raised believing that odds are pretty heavily stacked against you, but I am starting to think otherwise.
Posted by JD's Daddy at 8:00 AM