Well, after several months of debate as to whether High Numbers counts towards the actual Heritage set, I decided to jump on board and go the distance with the set. I was very proud for completing 1-500...it was not easy, it got a bit spendy, and the SP's were difficult to gather. But that set really symbolizes why the blogosphere is so great, and many of you contributed competing the set, so I figured I might finish this one up. Taking one for the blogosphere.

I went and grabbed one box the other day and will rip two packs a day for the next twelve. It is also a little bit of a countdown because after the 12th day of ripping, I go to present my dissertation for my masters degree, at which point I officially get my life back. So time to celebrate, and let the countdown begin!

On the 1st day of High Numbers, Topps Heritage gave to me... 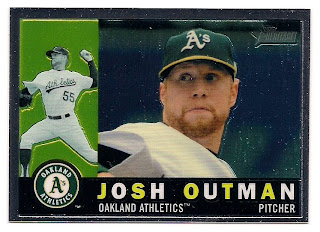 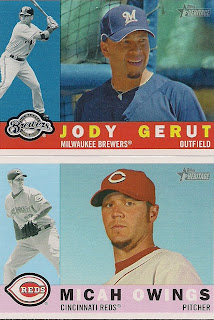 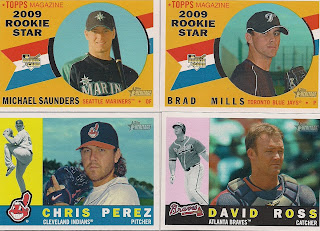 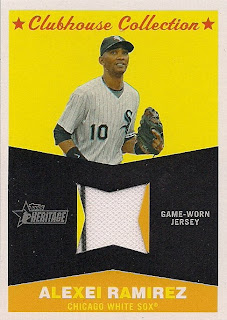 and my goodness, talk about taking the drama out of a box rip. Here is my relic hit in pack #2, and Alexei Ramirez jersey swatch complete with stripe. I could do a lot worse I guess, but I am not much of a swatch kinda guy. You never know, I have beaten the odds before and pulled extra hits from boxes...we'll see what happens!
And oh yeah...almost forgot about the star of the show... 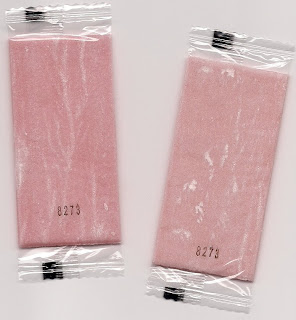 Posted by JD's Daddy at 11:08 AM No comments: Links to this post

A few interesting stories I noticed flipping through the paper piles today that I figured I would share with you since I have not ripped anything (but getting the itch for some Topps High Numbers or T-206).

In the Wall Street Journal there was a funny little blurb about MVP voting...did you know that Placido Polanco received a 9th place vote for MVP this year? Yup, Polanco and his .285 BA and 10 HR's impressed enough voters to earn him some points and to make the chart. Some other oddities from year's past were Scott Podsednik in 2005 with his .290 and o HR's, Scott Eyre in 2005 with o saves in 68.1 innings, Deivi Cruz in 1997 with a paltry .241 avg and 2 HR, and Charlie hayes in 1995 with a .276 avg and 11 HR. I am not sure how the votes are tallied or how the points work, but I do know that it is the writers that do the voting and WSJ has jokingly suggested that some writers did their votes on a dare. Good stuff. Also of note is a blurb that a goalkeeper got a yellow card this week for removing a cat from a soccer field.

Soccer you say, well yes indeed there was another story on Futbol. It appears that there is great concern over Baboons causing havoc in South Africa during the World cup next summer. Yup, it sounds like the baboons are the equivilant of racoons, bears, or dogs here in the US in that they are scavengers that seem to get into garbage and also people's personal foods (backpacks, picnic baskets, etc) and event coordinators are concerned that the increase in tourism during World Cup is going to increase baboon bamboozling incidents. Do you think that the goalie will get a yellow card for kicking a baboon off the field?

One more story a bit more puzzling...I read in today's Oregonian about Brandon Roy and his apparent systematical behavior of dissapearing into a tunnel during the national anthem to quietly pray and get himself squared for competition. I have never noticed this before, as the arena lights are typically out during this time to highlight the performer, and I am not certain that it is really anybody's business, but it is a bit perplexing to see the poster boy, team-leader, and all-around good guy exercising a questionable act such as this. He means no harm and is not anti-patriotic, but just uses those final moments before tip-off to clear his head. Where the contraversy comes in is what if other members of the team decide to join him in the tunnel, then how would that look. I am going to reserve opinion on this and give Roy the benefit of the doubt because he does not deserve otherwise, but nevertheless, an interesting story.
Posted by JD's Daddy at 11:41 AM 2 comments: Links to this post

After the standard library Saturday, I decided to head to Fred Meyers (its like a Target or Walmart equivilent) for some mac and cheese and chicken strips when to my amazement, I discovered that Freddies carries blasters! I was even more amazed to see an SP Authentic blaster (Cranky is going to be upset about this) as well as a Topps Updates and Highlights blaster. Now I had both in my hands but ended up with Updates and Highlights for a couple reasons...while a Derek Jeter auto is nothing to sniff at, the Updates and Highlights contains a guaranteed patch as well as an outside chance at an auto or an SP...plus at least a couple Turkey Reds. This one was a no-brainer... Here are the highlights of the Highlights...all for trade, minus the Turkeys... 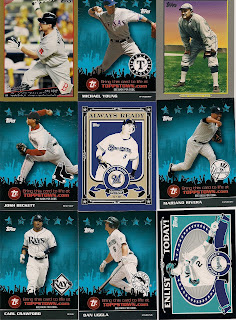 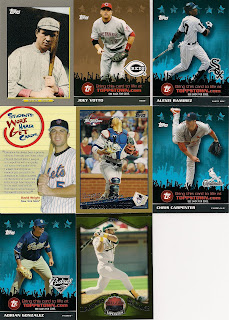 And now to the patch, also not for trade, but I feel pretty darn good about this pull... 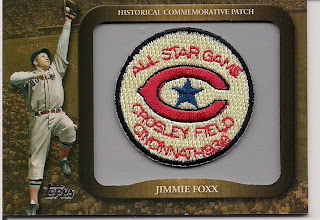 I replica Jimmy Foxx All-Star patch from 1938. I love the presentation on these patches, Topps does a good job with this guaranteed insert and I have happy to add it to the relics and swatches that don't bug the hell out of me box (its a small box).
Posted by JD's Daddy at 11:35 AM 1 comment: Links to this post

Throughout all of the madness that has been the last 12 weeks of my life, it is always nice to find little envelopes in the mailbox containing something other than bills or advertisements. I was surprised and happy to see a nice little envelope from down Florida way! Thanks to Troll
for the following: 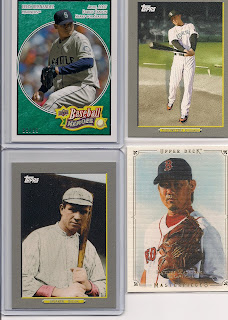 Oh yeah! Turkey Reds, I had almost forgotten about these! I need to get more proactive to finish this set up and thanks to Troll I am a couple cards closer to completion. I also dig the Felix Hernandez serialed parallel and am always a fan of UD Masterpieces. I may just have to try to snag a couple boxes of that series and throw it together right!

I will make a point to update my TR needs list if you would be so kind to take a gander. Thanks again Troll!

Posted by JD's Daddy at 11:17 AM No comments: Links to this post

I am long overdue in posting my 2009 Sweet Spot results from when I went bananas a few weeks ago and bought way too many packs, my disappointed rising increasing with each opened pack. I just could not get in a groove with this product, and it starts to make you wonder a bit when you speed by all the base cards (which are really well done this year, by the way) just to get to that fat piece of cardboard that is either a sweet spot, or a whammy! I got 7 whammies! Below are the results... 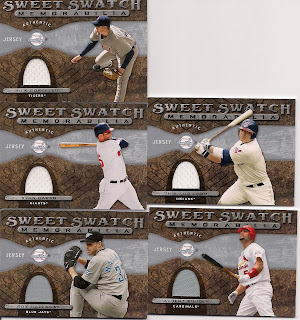 Now, I am actually OK with the Pujols and Porcello swatch, simply because it is pretty dang hard to get anything of Pujuls and I like phenom pitchers, but in reality I have swatch-lash. Patches are different, I like patches. I am still enamored with my Johan Santana patch that I pulled from 2008 Sweet Spot, but regular ol swatches just bug me. These are all for trade. 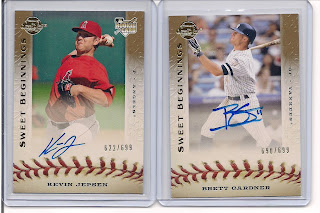 Of course if you don't hit the sweet spot, you are still likely to pull an auto of Sweet Beginnings. A Yankee and a pitcher I have never heard of. With any rookie cards though, these are worth hanging on to should they explode in their careers, but with high serial numbers these kinda feel like whammies also. I am not particularly attached if somebody wants to offer up a trade for these either. Have a great day!
Posted by JD's Daddy at 10:54 AM 5 comments: Links to this post