I have not really had a chance yet to update you on how the new collection philosophy has been working out. Basically, the goal is to have a complete page of each type of card that I like, whether it be a subset, a refractor, a certain-backed mini, a relic card, or an insert, my vision is to be able to flip through the pages of my binder and find a full-page of examples of each card type.

I have been working pretty hard trying to get individual pages together to start sharing with you. It has been a little difficult, because in some instances I have so many of a type of card that I have to pick and choose my favorites, which means that some of the others will be left out in the cold and traded (trade list coming soon). It is one of the signs of addiction when you can't seem to justify parting with a particular card, no matter how insignificant it is. Stay the course through.

One of the more enjoyable pages that I have been working on thus far has been collecting old-school logo hat relics from 2010 Topps Flagship. It all began with a few lucky pulls from some scattered jumbo pack purchases, and has since continued with a few snags off of Ebay. I really love these cards and Topps really does a nice job with the presentation. One goal of this page is to keep with the old-timer theme. Here is the collection thus far. 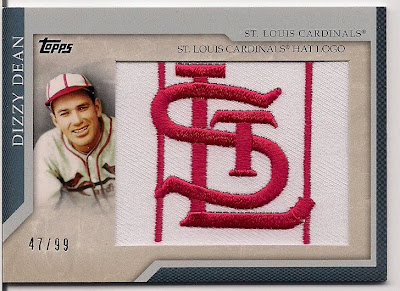 #1 - Dizzy Dean - Dean was my first Jumbo pack snag after lamenting over a pair of Cal Ripken pants and an omni-present shin-shoo choo relic from from two hobby boxes. Dean's patch was a breathe of fresh air. Dean played 17 years in the majors and collected 150 wins. Dizzy played for the "Gashouse Gang" with Daffy, and Pepper, and Ripper, and Burgess, and Leo, and Spud. The best though is after Dizzy was washed up he became an announcer for the St Louis Browns and declared that he could pitch better still than any of them. They took him up on the offer and in one game he pitched four scoreless innings...but then pulled his hammy running the bases and retired for good. It was a move only Nate McMillan could appreciate. 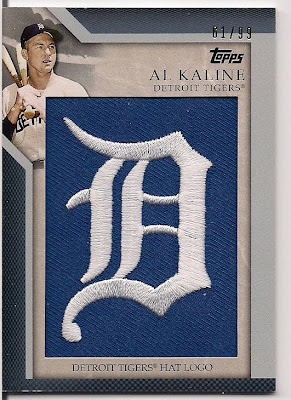 #2 - Al Kaline - For years as a kid I swore that they named batteries after this guy. Then I was informed that it was Al K-Line. Aha! "Six" was my second jumbo pack pull. He finished with just over 3000 hits and just under (399) 400 hr's. a 15x all star and 10x gold glove winner. Really magnificent numbers. It is also nice to see that he won the Roberto Clemente Award and the Lou Gehrig award. I am a big fan of good sportmanship. 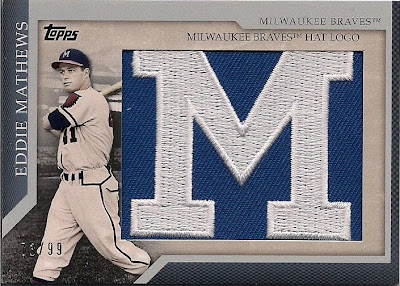 #3 - Eddie Matthews - Jumbo luck #3 tossed me yet another classic player. Eddie received two rings and was a member of the travelling Boston/Milwaukie/Atlanta Braves. A hot-box extraordinaire, Eddie is also a member of the 500 HR club. 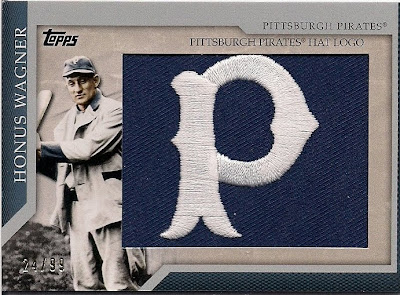 #4 Honus Wagner - No more jumbos. I already have too many insert cards, of which most of them are going to be traded away anyways (stay tuned). Time to hit up the 'Bay and continue with the classic logos. HONUS! This was a great find and probably my favorite of the bunch. "The Flying Dutchman" seems to always be connected to his competitive nature, especially with Ty Cobb. While accounts seem to vary, it appeared that Honus was less than intimidated with Cobb's ferociousness and stood his ground, going toe-to-toe with Cobb in a battle of league batting champs. Honus prevailed. One tough son-of a gun and a cool logo to boot. 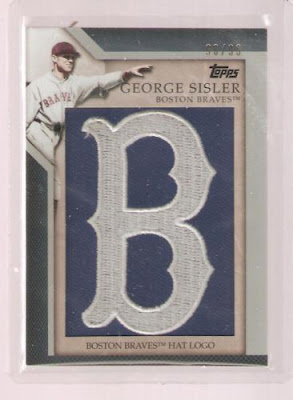 #5 - George Sisler - Found a pretty good deal on a Boston Braves George Sisler. As a collector, Sisler has been mainly off my radar, but I know him as the guy with the 41-game hit streak and the 257 hits record that held for 84 years until Ichiro broke it in 2004. 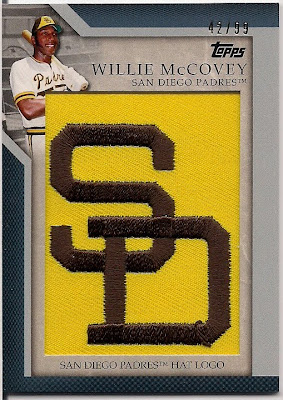 #6 - Willy McCovey - When I purchased this on Ebay there was no image so I just assumed that it was going to be a SF logo, which as far as I know has changed very little over the years. I was pleasantly surprised to find this card in the mail instead. A rather odd choice indeed, but no different than the Sissler card I suppose. McCovey is yet another member of the 500 HR club.
So six down and three to go. I think a nice old-fashioned swooping Philadelphia "P" would be a nice fit in here, but they run pretty high. I should pull one out of a series 2 jumbo, but if I end up liking them enough, I may have to make series 2 its own page!
If you have pulled an old-fashioned hat logo that you are not particularly attached to, or if one of these really jumps out at you and you have a hat logo (old-fashioned) to offer in exchange, shoot me an email and let's make a deal!


Posted by JD's Daddy at 9:23 PM No comments: Links to this post