Choose your own adventure Friday!

By the hair on my chinny-chin-chin, you have selected JD to go to Target with me to pick out a random pack for review. This can go several ways, as JD is pretty familiar with the looks of the packets that I typically open, at which point you would be subjected to yet another ginter pack bust...OR perhaps some colorful Pokemon cards this time? Jacoby is also pretty into " 'ockey" as this is always the first word out of his mouth when I flip on the tv after work for some sporting event to watch.


But no. I completely forgot about Jacoby's other favorite past time over his 23 month career, and that is CARS! Loves em. And seeing a bright yellow Dale Sr. #3 made him make an instant grab for this... 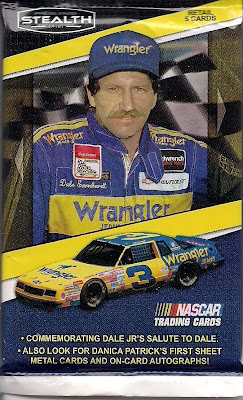 NASCAR trading cards! I believe this is by a company called Press Pass Inc, and this product is called Stealth...but it is all rather unclear. Don't expect a lot of excellent NASCAR tidbits here, I don't really follow the sport, though I am not too incredibly ignorant about it either. Kind of in the middle, in a hazy, uncaring state is the best way to describe.

My first thoughts is that Dale does not look good here. I don't want to go the undead Dale route, but have you ever seen the scene in Blues Brothers where the Blues brother cop car throws a rod during a chase scene and they all end up covered in oil. That's what this reminds me off. Make it a cover shot I guess......Maybe I SHOULD just go with undead Dale. 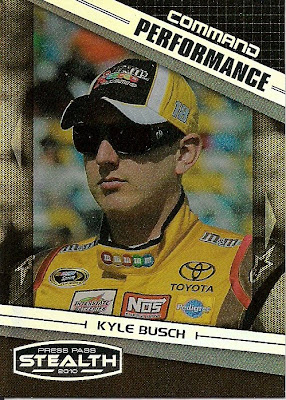 Card #1 - Kyle Busch. Kyle is propped up for winning the Ray Asbestos Rookie of the Year honors in both circuits. He is credited with "throwing down the hammer" all season. Git er done Thor. 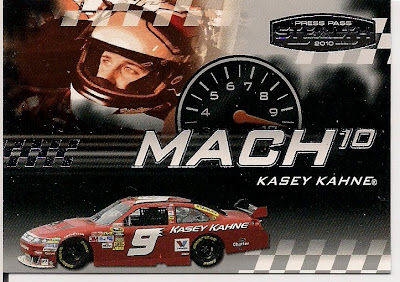 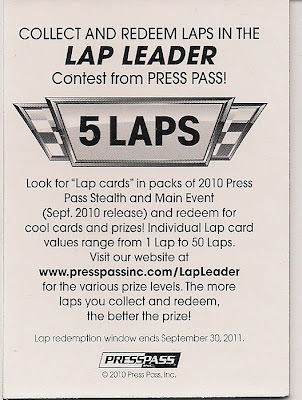 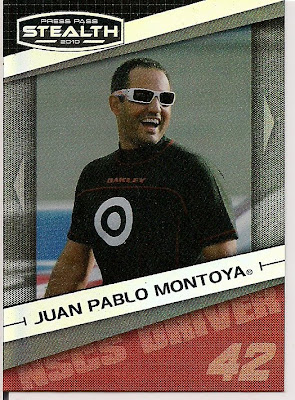 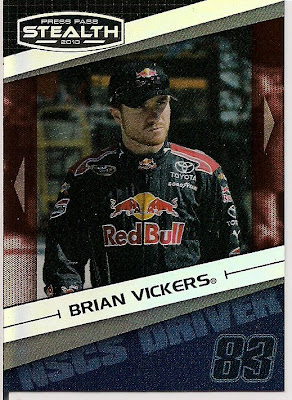 Card #5 - Brian Vickers - Fueled by Red Bull, Vickers won the most poles in 2009 (six), proving that when you don't have 42 other cars to deal with, you can achieve anything! On a serious note, Vickers is receiving treatment for blood clots, which is no laughing matter. I had the same thing happen to me and am on blood thinners for the rest of my life, so I wish him well with his issue and hope doctors can find a solution. 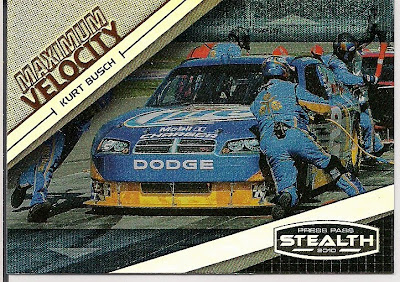 #6, Kurt Busch - Throwing down the hammer! Maximum Velocity! Mach 10! These cards sound a little too dangerous for me to collect. I tend to be a little more conservative....though I did drive today while eating an egg mcmuffin.
So not hits (you get sheet metal relics in NASCAR cards!) no auto of Danica, just five cards and a few laps. i will say that the quality here is pretty good. Each of these is a refractor, each looks smooth and shiny, and each has some quality tidbit on the back. Certainly a niche product, but a lot of effort has been put into these.
Posted by JD's Daddy at 7:30 AM 2 comments:

This came courtesy of another rack pack of Ginter. I have had remarkable luck with uncommon cards out of retail and blasters, and the luck continues. 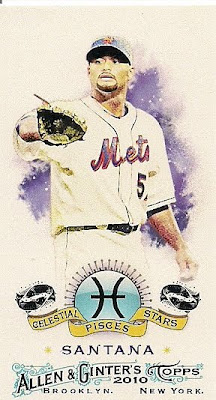 Your horoscope for Pisces:

You will spend ridiculous amounts of money purchasing hobby boxes and ebay auctions, trying to obtain the entire set of celestial stars "case hits" because it is widely believed (wrongly, of course) that these cards hold the secret to the Ginter Code.

Ah, alas it was all just blather, as the code had nothing to do with anything card-related at all. Regardless, these are really sweet cards and that brings my grand total up to two so far, with feelers out on a third. If you have a celestial mini that you would like to trade for something more your speed, give a shout and lets see if we can work a trade!
Posted by JD's Daddy at 7:30 AM 1 comment: 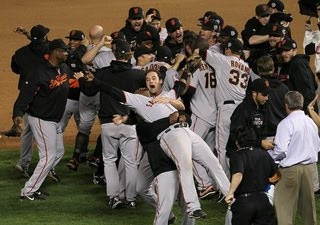 .....on enemy turf. Bummer. I have always been a huge antagonist about the 2-3-2 final series in both basketball and baseball. At least in my recent memory, it seems that the away team often cliches, and a somewhat subdued celebration takes place. Kind of a bummer because you wait all season for a big finale, and it is suddenly over, and you are left with a bunch of old owners in funny suits standing around awkwardly accepting a trophy on national television. Of course, you certainly cannot guarantee with a regular 2-2-2-1 or 2-2-1-1-1 that it will increase the chances of a home team celebration, but it just feels like too many of these puppies happen on the road.

Of course, something that Fox apparently decided to do was to wait to interview the players until after they have celebrated inside the locker room, and come out half-lit onto the field. Timmy had a classic moment. 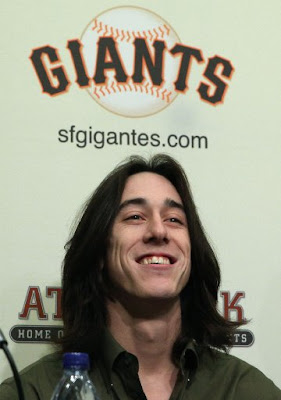 Announcer "What do you think is going on in San Francisco right now"
Tim Lincecum" Well, I hope that the beer is flowing free and there is smoke in the air!"
I am sure that he meant fireworks. 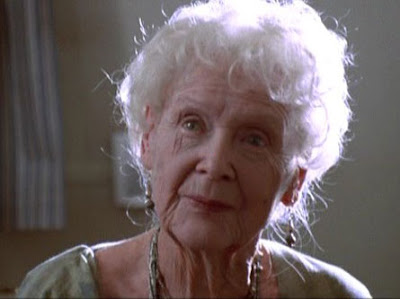 Holy crap! Is that the old woman from Titanic? What is she doing here. Actually without actually footage to grab for this post, I remember the scene in some square in San Francisco where the fans were "celebrating" after the final out. Actually they were looking around awkwardly until they knew the camera's were on them, and THEN they celebrated.
But mixed within the crowd was an extremely short, elderly woman, fully decked out in a fuzzy orange hat and orange coat. And she was dancing, and just having a blast. I started thinking about that old lady, imagining just exactly how long she has supported this team...maybe back to the days in NY? Maybe she goes to every home game and could tell some amazing stories.. She was a true fan amongst confused people and I bet that this World Series means so much more to her than anybody else. Keep rocking. 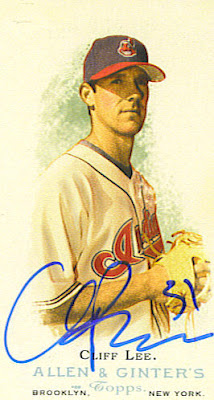 And my final thoughts. My Cliff Lee. Conspiracy time....WHY did he shave his beard prior to the game? Superstition? Itchy? My guess (which is lore) is that he was already taking his media photos wearing his Yankee pinstripes. Gotta be clean-shaven, right? Betcha he threw on the pinstripes, even had a few baseball card photos taken for Topps 2011.
It's all over!

Just recently, across the continental divide of this mine continent, a misguided Yankees fan by the name of Drew had a rather remarkable box break of T206. Out of his box he not only pulled an auto redemption for some dude named Strasburg (sell high), but he also pulled his second hit, as well as a couple snazzy minis that I had no idea even existed. 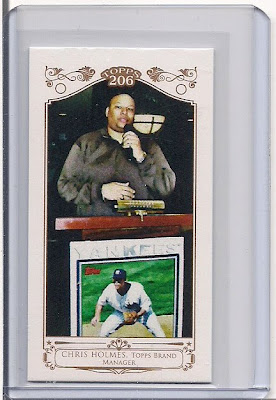 When I first saw this image, I thought it was the most ridiculous thing that I had ever seen...and it was a must have for the mini vortex binder. Topps T206 brand manager Chris Holmes. It has a nice little bio of yadda yadda yadda on the back and is serial-numbered to 206. I love these self promotion cards. I have heard of, but have never seen the Ginter autos of the Ginter staff that seem to be all the rage...this is another example of that type of shameless self promotion. But unique it is, and traded for it, I did. 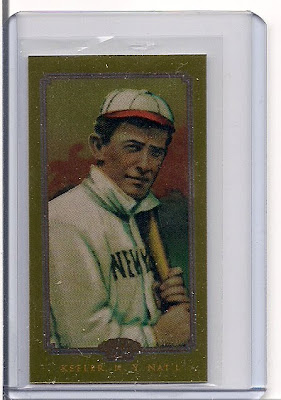 Yet ANOTHER unknown mini hit out of the magic box was this Willie Keeler gold-bordered /#50. Scanner is a little dusty, but this has a nice shine to it. As I was reading up on Keeler to toss you some sweet historical facts and look super-smart (Baltimore Chop), I did notice a bit of an oddity here that I thought you historian buffs might be able to make some sense of... 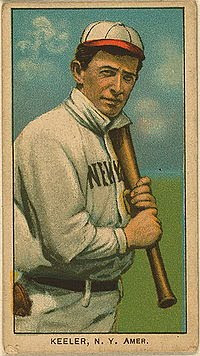 This is the original Keeler from 1910. NOTE: the league is different on each of these cards. The reprint says NY Natl, and the original says NY Amer...hmmm, Now the originally might indicate Keelers time with the New York Highlanders, OR perhaps Mr. SP T206 Brand Manager might want to explain what happened here...hmmmm.
Posted by JD's Daddy at 7:30 AM 1 comment: