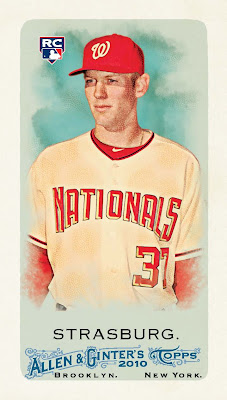 Sorry the cash cow dried up. Perhaps you have a goose that laid the golden egg up your sleeve next? Please lower the prices of all your 2010 products back down to regular human prices again so we can all begin enjoying collecting again without having to put a second mortgage on the house.

JD's Daddy
Posted by JD's Daddy at 7:56 AM No comments: Links to this post 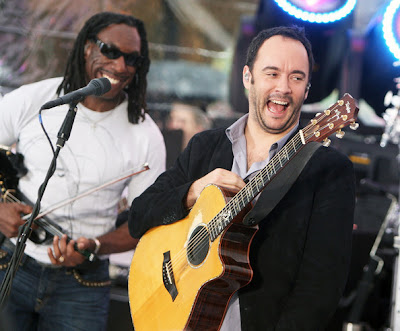 Tomorrow, my wife and I will be taking a parenting break from our budding prodigy JD, and are hopping a short flight down to San Jose to catch the Dave Matthews Band in concert at the Shoreline Amphitheatre on Saturday night. This is actually a birthday present from my wife's May birthday that I actually had to purchase online back in March. So having to keep the present a secret for three months, and THEN have to wait nearly another three months to actually attend the show has been a brutal wait.


As well, our plans to spend the entire day at the hotel pool soaking up that warm, California sun may seem to be on hold since (after near-record setting heat) the temps are expected to be in the mid 60's all weekend :(. Oh well, maybe they have a hot tub.


Either way, I refuse to let the weather get me down and I am jacked to go to another DMB concert. The best part of a live DMB concert are the crazy, original, and unscripted jam sessions that break out every show. 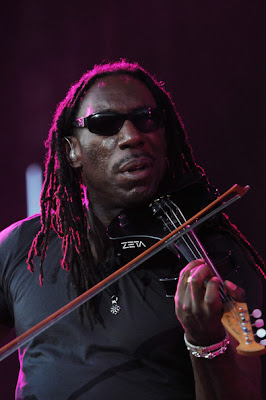 One of the best jammers, in my opinion, is Boyd Tinsley (above). Watching this dude fiddle will absolutely blow you away. Dude has MASSIVE arms and when you see him rocking out on that fiddle you will understand why. Just an absolute master at his craft.

Combined with an excellent album release this year, a nice venue, and some reasonably close seats (not body surfing close) but not out on the lawn either, both Stacy and I are very excited about our brief, but exciting adventure. 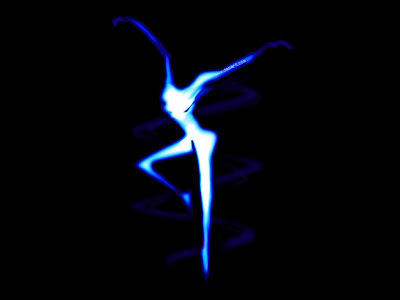 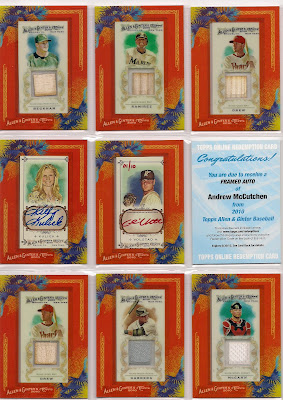 It's been awhile since I have posted a competed nine, so I thought I would share with you my completed page of relics/autos from Ginter 2010. Whoops, looks like we have a Drew duplicate in the binder (why didn't I notice that earlier??). As you can see, my pulls included my first red auto, a supposedly popular auto of a professional bowler and a yet-to-be-redeemed auto of latest Pirate talent Andrew McCutchen. I am looking forward to that one. As relics go, I could have had worse luck I suppose.

Since I originally scanned these, I have dived (doven?) into some retail packs and have actually pulled a couple more shiny relics to add to this list. They are not scanned yet, but let me jump on eBay to see if I can find them... 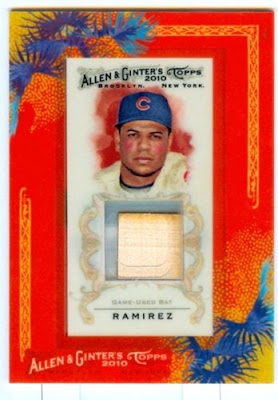 Ah yes, the perpetual Aramis Ramirez pulling-ability has reared it's ugly head once again. He was my very first hit pull ever, and the hobby continues to remind me that Aramis Ramirez does, in fact, play for the Cubs. Maybe there is a hidden Lincoln etched into the bat. 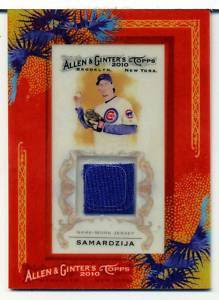 Another Cubby from a retail pack, Jeff Samardzija, who is currently mired in AAA but is expected to make a call-up before next week. I don't know a whole lot about the pitcher, but a smurfy blue jersey is a welcome change of pace from the rest of the pack.

Of course I only have room for nine relics, so if any of these are jumping out at you and you want to make the swap, I would be happy to discuss with you! Leave a note or send an email. 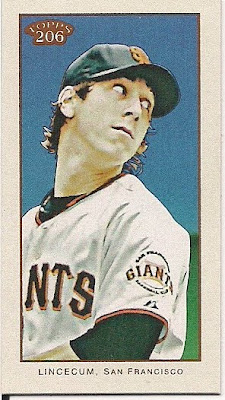 This 2009 T-206 is a beauty, and was yet another hidden away treasure in the game room, now safely stored in a binder. I'll have to check my snazzy mini-database, but I believe that this is the only mini of Lincecum in my collection so far.

While I have not talked a ton about the Red Sox this year, I definitely have not talked much about Big Time Timmy Jim either. Last spring, after the joint Ginter Codebreaker sale of Michael Phelps card, I decided to get myself something that really wanted, a Bowman Tim Lincecum Graded Rookie Auto. I love that card and it is displayed proudly on a shelf in the man cave. Timmy has gotten off to an amazing start to his career and I had visions of a third straight Cy Young...especially competing in the weak NL, and especially against the weak NL West.

Things started off swimmingly enough, Lincecum jumped out of the gate to the tune of a 4-0 start and eventually 8-2 by mid-June.

But things have changed in the NL this year. The teams are better, the pitching is better, and by far the division is stronger than in past years. Ubaldo Jimenez is suddenly hot sh#t and is having a mammoth year for the Colorado Rockies. Timmy has now lost four straight decisions and six of the last nine. The make things worse, he relinquished the NL Strikeouts leader title, and currently trails that category by 16 K's. Difficult to make up, but not impossible.

One of the biggest alarms that went off about Lincecum this year is batters began to discover his inability to hold base runners. Basically if you can find a way to make it to first, you can make it to second on a steal. So three years in, batters have found a chink in the armor.

Regardless, I like what the Giants are doing this year, love pulling for the Freak and hope to see Timmy reach the post-season and pitch on the big stage soon!

Posted by JD's Daddy at 8:00 AM No comments: Links to this post 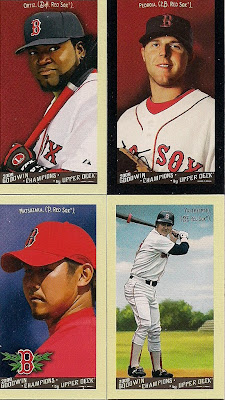 This is another set of minis that were hidden away in a crevace in my game room as I shuttled out hobby boxes for the garage sale last weekend. I am really glad that I found these, logged them and put them safely away in the binder. Goodwin Champions was just a top-notch artistic offering that also, fortunately, became a reasonably affordable offering due to bad word-of-mouth from reviewers. "Ginter Light" What I love about the current players is the rich, deep coloring and shadows that a lot of the Goodwins demonstrate. Then they also threw in a smattering of historical figures, champions, HOF's and animals and really made a nice product.

Finding these cards really got me thinking about the Red Sox this season. I have not really blogged much of my thoughts on the team this year. My gut reaction would be to say that I have been disappointed, mainly because the Red Sox have not acquired that necessary piece to push them through post-All-Star break play. Both the division and the wild card are RIGHT THERE, and yet the Red Sox do nothing. If I could describe it with metaphor, I would say it is like chasing a dollar bill attached to a string.

But then again, that is really not fair to this team. Here is why.

Back in 2006, and more specifically in August of 2006, the Red Sox were decimated with injuries...Captain and team leader Jason Varitek was out with Knee Surgery, Jon Lester was diagnosed with cancer, Tim Wakefield had a fractured rib, Alex Gonzalez had a strained oblique...all on the disabled list. Manny claims his knees hurt, and Youk, Beckett, Loretta, the then-closer Keith Foulke....all injured in some manner or another.

Each night I would flip on the games and it would feel like watching AAA. And the team floundered, badly. A hotly contested AL-East quickly became a foregone conclusion as the Sox ended up 11 back of the hated Yankees. Boo.

THIS year, things could not be more similar, or opposite. You name the player, and they have most likely been hurt this year. Ellsbury (sniff), Pedroia, Youkilis, Martinez, Varitek, Beckett, Buchholz, Dice-K....need we keep going? The major difference is that the replacement players that have been called to duty to fill in for fallen heroes have played amazingly well together. It is a true testimate to the quality of the Red Sox farm system that a bunch of players are hurried up through the ranks and have actually found a way to continue to tread water when this team could have easily mailed this season in back before the All-Star break.

Frustrating chasing that dollar bill? YES, without a doubt it is never any fun to consistently be 5.5 games back. But there are tons of teams that would kill to be in this position with a month to go, and i'll be darned if the Red Sox don't continue to weather the storm and find ways to win.

Also, the fact that the last generation of Red Sox champions are slowly fading into team lore (sniff) is really making me feel confident that they have a solid, talented young core to be the next Red Sox heroes.

All they have to do now is get rid of those rookie baby-faces, grow some facial hair, learn a few creative hand-shakes and the next gen will be ready to rock and roll!
Posted by JD's Daddy at 12:15 PM No comments: Links to this post 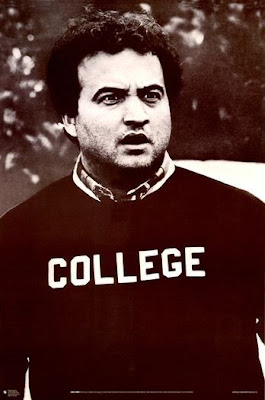 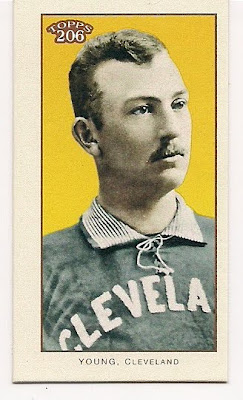 Over the weekend, the wife, Jacoby, and me decided to hold a garage sale and make a little extra space around the house...more specifically the garage, where most of this stuff lived. It was a mediocre profit day, and almost half of those profits were spent that evening anyways as when we left the house to drop off remaining items at Goodwill, we realized that we had locked ourselves out of the house. Easy come, easy go...but the garage looks much better.
A nice little slap of reality hit that day as well. I had about 8 random hobby boxes laying around my game room with some random base cards from each product. I decided to clean up a bit and set the boxes outside with a sign listing them as "5 cents per card or $5.00 for the whole box). I figured there would be some kids filtering though as the day went by and I could at least make a marginal amount before sending them to Goodwill.
Negative.
In fact, not only did I not sell a single base card all day long, but NOT ONE PERSON EVEN LOOKED AT THEM! Kids walked right on by, adults had blinders on. I even faced up great players like Ryan Howard and Mickey Mantle, and nothing. It's enough to really make you think about our little collector's niche and all of the money we throw into the hobby every weekend!
Regardless, Cleaning up the game room did give me a chance to locate some MIA mini cards for my mini-madness binder. The card above is Cy Young from 2009 T206. I am glad I found this card, hidden away in a top loader, as it is definitely one of my favorites of all minis. This particular card is quite the enigma. It has a regular back, regular base card number, and all-in-all seems to be a regular set card, but for months I have searched for others of Cy, and have come up empty. So while all logic dictates that this is a regularly product mini card, it sure seems pretty mysterious. Into the binder it goes.