For the last week of 2009, I thought it would be fun to go back through some of the sets that I have collected and pick out some of my favorites of the set, and well as some bombs. I had a great time going back through Topps 2009 Flagship. This was the first set that I collected since starting my collection last spring, so there was quite a bit of nostalgia going through the 660 hand collated cards.

My first impressions were "damn, these numbers are STILL hard to see". The black numbering on dark blue triangles, and even the green triangles was a bear to read, and I still remember staying up into the late hours collating the set and going to bed with a throbbing head. Here's to a better numbering scheme in 2010. I was also surprised at the wide variety of blurry cards, sharp cards, tacky cards and stunning cards. Truly a hit/miss on photography.

The following are cards that I like the best out of Series 1. The picks have nothing to do with the player, but purely how much the card grabbed my attention when flipping through the set of 330. 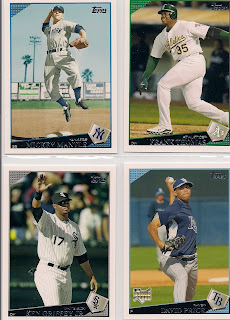 Mickey Mantle - While I learned quickly that Mantle being the #7 card was a common Topps gimmick, I still remember my heart skipping a beat when I pulled it. Love the washed out grey on light blue scheme. I later pulled this same card in Chrome and it really pops.

Frank Thomas - You will notice quite a few A's in my choices. I don't know how they choose photographers for each team, but whoever did the A's did a fine job. Nice, clear photo.

David Price - I mentioned this one earlier in the year. This is one of my favorites of the year. Great shot, great colors, great clarity, and a rookie card to boot. 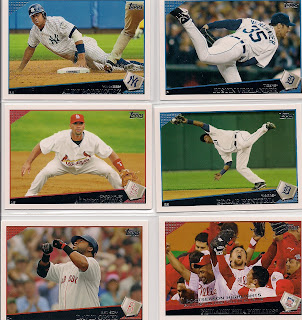 I really fell for the horizontal shots of the series, as they really can add more drama to the card.

A-Rod. What? Why choose a notorious Yankee scum? Well, again, this is not biased towards players, and I have to admit that if you needed an attention grabbing card to lead off your set, Topps chose a great shot.

Justin Verlander - Topps takes full advantage of Verlanders classic pitching motion with a crystal-clear shot that spans the length of the card.

Albert Pujols - I would say this shot one of, if the THE best of the series.

The Phillies - This is probably the best card each season. Just pure elation caught on a card. 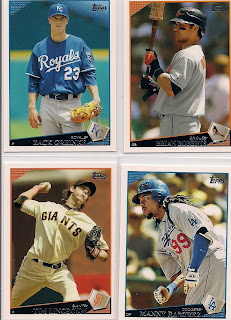 These next four really grab my attention with the fantastic color schemes. 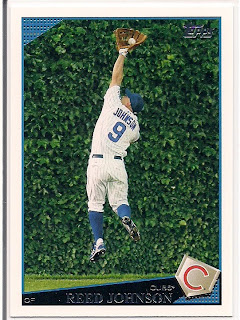 And I'll top of series one with my favorite action shot of the set. Reed Johnson making an impossible grab at the ivy.

Of course with every set of great shots, there are the cards that make you wince when you see them. Below are my "razzie"nominations for series 1... 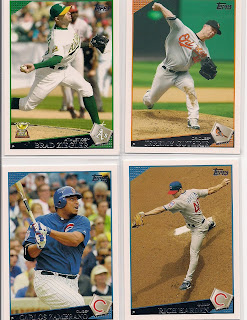 Brad Ziegler and Jeremy Guthrie display disgustingly contorted body parts mid-pitch. I am aware that some pretty funky stuff is going on when guys through the ball, but I mean, good god,it looks like Zieglers are is on inside out and Guthrie's ribs look like they are going to burst along with all the veins in his neck and arms.

I was not impressed with Big Z swinging a bat, nor any of the several "Met-Life" blimp cam shots of pitchers in motion. The closest to a decent blimp shot was of Greg Maddux, but even that one did not look quite right. Harden takes the cake for the worst though. 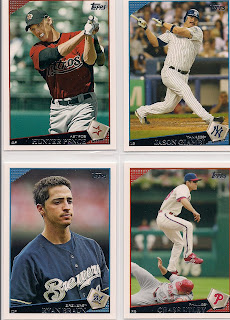 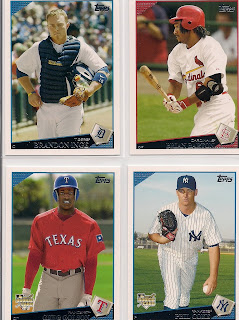 And finishing off with my least-flattering shots of the set...I'll let you add your own caption on these less-than-stellar photos.

Tomorrow we'll continue on with Series 2!